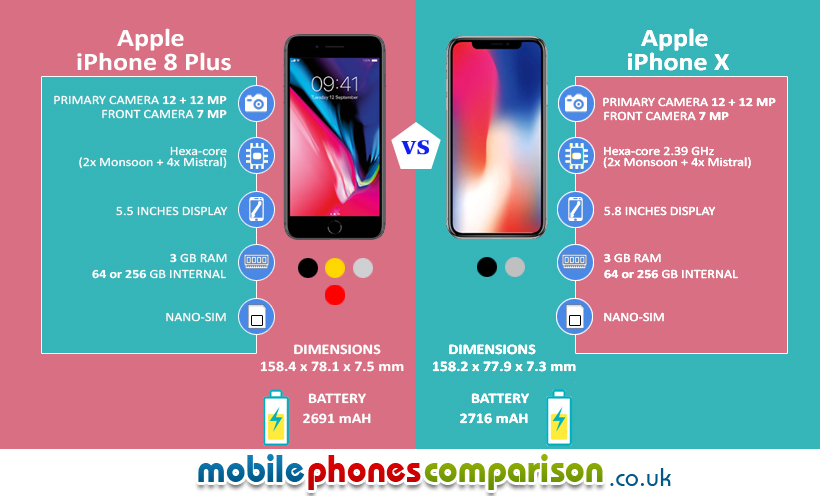 Apple users around the world are debating between the Apple iPhone 8 Plus and the Apple iPhoneX. Both devices were released in quick succession of one another, leaving users wondering if the upgrade is really necessary.

This comparison between Apple iPhone 8 Plus vs Apple iPhoneX will help you make that decision.

The iPhone 8 Plus is larger in size, overall but has a smaller screen and thicker bezels in comparison to the iPhone X. it also features a physical home button.

The iPhone X comes with a Super Retina HD Display which allows for a sharper display and more pixel density in comparison to the iPhone 8 Plus. The notch on the iPhone X on the top of the display comes in the way with videos or even games. This makes the 8Plus more effective, making it seem like the bigger display.

The iPhone X comes with a slightly faster aperture and provides IOS for both its lenses. Both devices come with a 12MP dual lens camera. However, the small changes in the camera of the iPhone X such as better video zooming, better low light images and more detail and sharpness, makes the experience of using the camera a lot better.

For those who love selfies, the depth-sensing front camera in the iPhone X also captures portrait pictures. This feature is not available with the iPhone 8 Plus.

Face mapping with the depth sensing front camera of the iPhone X is much better than the iPhone 8 Plus. This feature allows unlocking your device with a Face ID. This is not possible with the iPhone 8 Plus. You can also send animated emojis that are able to recognize your facial movements.

Battery life is longer with the iPhone 8 Plus. While the difference is not very significant, it is important to make not of.

The iPhone X is certainly more future proof. Features like the home button and the fingerprint sensor in the iPhone 8 Plus make it relevant today but are just delaying inevitable changes. The iPhone X comes with several new features such as the screen notches, face unlock and animated emojis that are becoming the norm in the contending android devices.

As for performance, these devices run on the Apple A11 Bionic chipset. They both feature a 3GB RAM and are extremely powerful in terms of speed and glitch free navigation.

You can now buy your dream smartphone at prices that suit you. Get the best deals in smartphones and the most affordable calling, texting and data packages only on www.mobilephonescomparison.co.uk