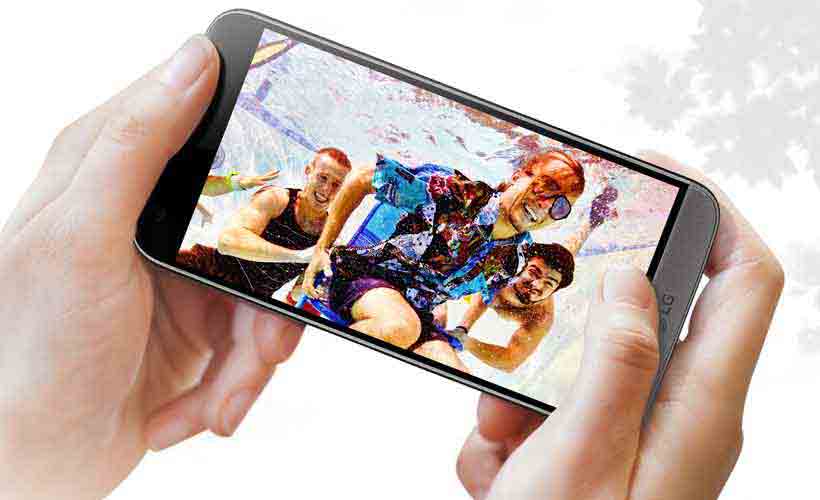 This is certainly a flagship device by LG. With several features that match the top runners in the smartphone industry, this phone is a great investment for those who are looking at a medium range smartphone.

Curvy and sleek is the way to describe the new LG G5 32 GB Black. This phone has been upgraded to a micro iodized metal body that feels very different from the other metal framed phones. The sloping top is a feature that sets this phone apart. The 5.3-inch screen comes with an always-on mode. Quad HD display with the IPS LCD screen ensures great picture quality. In fact, LG became one of the first devices to bring quad HD 2560X1440 panels into the market.

The operating system with this phone is the latest Android 6.0.1. It includes several tweaks that make performance above average. The internal system of the device is sheer power. You have a Snapdragon 820 processor with a 4GB RAM. You also have one storage option which is the 32 GB internal storage.

You have several new inclusions like the fingerprint sensor that make it delightful to use the device. The battery is average at 2900mAh. It is removable as opposed to most other phones in this price range. The camera of this device is top notch. You have a 16 MP rear camera and an 8 MP front camera. The highlight is the wide angle option that sets it apart from other devices in this price range.

We recommend to compare the LG deals and grab the best offer at the affordable price. Getting a phone in this price range is not an uphill battle anymore with mobile phones comparison. You can get some of the best pay as you go deals and contract phone deals with a network operator of your choice.