Samsung Galaxy Fold Review and Price in the UK 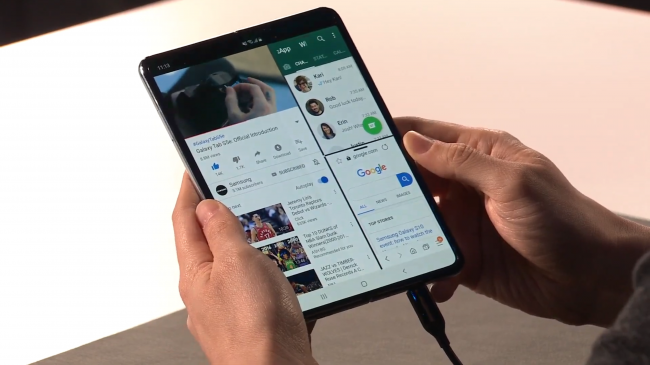 The coveted Samsung Galaxy Fold left everyone asking for more when it was first launched in February alongside regular Galaxy S10, larger Galaxy 10 Plus, next-generation Galaxy S10 5G and semi-affordable Galaxy S10e at Samsung’s Unpacked event.

The device stole the show with its never seen before foldable hinge design which lets its switch between a tablet and phone modes in a jiffy. Samsung hasn’t revealed the exact specs of the device and has kept it tightly wrapped, further adding to its mystique.

However, the fresh foldable challenger Huawei Mate X with its good looks and larger screen phone mode can be a tough competition to the foldable phone from the house of Samsung. And with Motorola already having a folding phone in the market and its heavy investment defined for the segment, the curiosity on what the Galaxy Fold has to offer is an all-time high with mobile enthusiasts waiting to use it and give its pros and cons.

Here is a breakdown of every little detail about Samsung’s folding phone.

According to Samsung, there will be two versions of the Galaxy Fold: a 5G model and an LTE model. The handset will be available in Space Silver, Cosmos Black, Martian Green and Astro Blue colour schemes, and the company says you’ll be able to customize the hinge colour too. This certainly will attract many customers who fall for good looks.

The phone will be packed in a luxurious packaging and will have the new Galaxy Buds as a freebie. The pre-orders will be available on April 26.

Samsung has come up with “App Continuity” functionality wherein you will be able to access apps using the outer display, then pick up where you left off on the inner display on opening up the Fold. This means you can use three apps at once on the inner display.

The luxury device as it is being described has specifications matching up to it. The phone is packed with 7nm 64-bit octa-core processor and a huge 12GB of RAM, and 512GB of internal storage. There’s no microSD card slot.

The phone has two batteries-one on each side which will work in unison to give a capacity of 4380 mAh. The Fold can be used to wirelessly charge another device via Wireless PowerShare.

AKG-tuned speakers along with a side-mounted fingerprint sensor and UFS 3.0 support are also present.

One will be able to get hold of all the features only after its launch in May. Till then, just hold on to your patience and wait for it with open arms.